CASSAVA FOR BIOFUEL IN VIETNAM 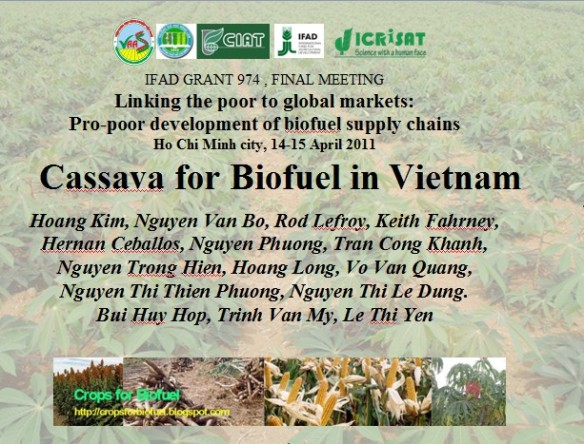 CROPS FOR BIOFUEL This paper to supply the final report for three years (2008-2010) research and development of cassava varieties and new techniques at pilot site selection in Dong Nai, Tay Ninh, Ninh Thuan and Yen Bai province, a production map of cassava for biofuel in Vietnam: opportunities and challenges, and recommendation for next step.

Three urgent issues of global are energy crisis, environmental risk and food security. The International Crops Research Institute for the Semi-Arid Tropics (ICRISAT) received grant funding from the International Fund for Agricultural Development (IFAD) to implement this project, which is also known as the “Programme for Linking the Poor to Global Markets: Pro-poor Development of Biofuel Supply Chains,” but will hereafter be referred to as the “IFAD Biofuels Project”, during a three-year period, between Jan.2008 to Dec. 2010. The objective of the project is to integrate improved cultivars of biofuel crops in smallholder farming systems to provide an alternative source of income, while meeting the varied needs of rural communities for food security and animal feeds. The project will work on three continents, with three major crops as feedstock for biofuels: sweet sorghum (in India, the Philippines, and Mali), cassava (in China, Colombia, and Viet Nam), and jatropha (in India and Mali). A detailed description of the project is found in the project design document, which was submitted to IFAD in Dec. 2007. ICRISAT is the Programme Executing Agency, responsible to the project’s donor (IFAD). CIAT will manage the cassava research component of the IFAD Biofuels Project in partnership with the Viet Nam Cassava Programme (VNCP) in Viet Nam (including VAAS and NLU) , the Guangxi Subtropical Crops Research Institute (GSCRI) in China, and the Latin American and Caribbean Consortium to Support Cassava Research and Development (CLAYUCA) in Colombia. Two sections of CIAT are involved in the IFAD Biofuels Project, namely the CIAT Cassava Program based in Colombia and the CIAT Asia Regional Office based in the Lao PDR, Components of the cassava research programme the following Breeding, Varietal Evaluation, Agronomy, Crop Management, Analysis of Livelihood Systems, Assessment of Market Linkages, Models for decentralized bioethanol production, Waste management, Knowledge Sharing. This paper to supply the final report for three years research and development of cassava varieties and new techniques at pilot site selection in Dong Nai, Tay Ninh, Ninh Thuan and Yen Bai province, a production map of cassava for biofuel in Vietnam: opportunities and challenges, and recommendation for next step.

BRIEF RESULTS AND RECENT ADVANCES OF CASSAVA FOR BIOFUEL

Cassava production in 2009 in Vietnam reached 9.45 million tons from 1.99 million tons of production in 2000. It is the result of the expansion area from 237,600 ha to 560,400 ha and the yield from 8.36 tones / ha in 2000 to 16.90 tons / ha in 2009. Vietnam has made rapid technical progress in Asia in the selection and breeding of cassava. This progressive is due to many factors but the main factor is the achievement of breeding and cross breeding of cassava. Productivity of cassava production in many provinces had doubled by planting new cassava varieties and high yield cultivation techniques applied cassava appropriate and sustainable. Area of new cassava varieties cultivated over the whole country is 500,000 ha, mainly KM94, KM140, KM98-5, KM98-1, SM937-26, KM98-7. Cassava chip and cassava starch have a high competitive advantage and market potential of cassava. The combination of development and production of cassava as starch processing, animal feed and bio-ethanol has created more jobs, increase exports, attract foreign investment and contributed to industrialization, modernization of some rural areas.(Hoang Kim, Nguyen Van Bo et al. 2010). 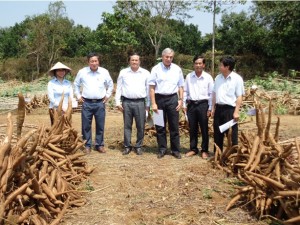 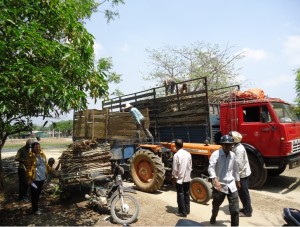 CASSAVA FOR BIOFUEL IN VIETNAM: OPPORTUNITIES AND CHALLENGES

Cassava as raw materials for bio-fuels processing is the golden opportunity for Vietnam famers to increase their income. Reasons: 1) Cassava has a high yield of alcohol (six kg of fresh cassava tubers are processed one liter of alcohol) the price of biological material from cassava cheaper than other crops. 2) Cassava is a large volume of products. National cassava production reached almost 10 million tons of fresh. 3) Cassava is easy to grow, little cocoon of land with low cost investment in the appropriate economic conditions of many poor farmers. 4) Cassava varieties offered good and appropriate cultivation techniques. 5) Cassava has attractive profit. It has approximately 10-25 million per hectare. 6) Cassava price is stable outlook due to high demand for cassava export market and domestic consumption. Cassava areas of Vietnam are very close to China, the world’s largest cassava market. Moreover, six ethanol factories in Phu Tho, Quang Nam, Quang Ngai, Binh Phuoc, Dong Nai and Dak Nong are building with a total capacity of 550 million liters of ethanol per year. 7) Vietnam farmers are hardworking, energetic, have accumulated much experience increased productivity and efficiency economic advantages of cassava reached high compared with other countries in the region. Cassava growing to supply the bio-fuel factories with competitive prices attractive acquisition will help farmers to increase their income. It creates new industries and products in rural areas, formation of industrial clusters and urban ecology, increase employment and livelihood for people, open countryside towards improving social life.

Environmentally friendly issues and food security The survey results of the Institute of Policy and Strategy for Agriculture and Rural Development (Nguyen Anh Phong 2010) suggests: Cassava area up to now has exceeded the government’s plan. However, it was small, scattered and lack organizational effectiveness. Maintaining the cassava area is now planned by the Ministry of Agriculture and Rural Development will cause a local scarcity of cassava and seasonal ingredients for bio-ethanol competition will push prices higher cassava. The process of sustainable cultivation of cassava is available, but little has been applied by the spontaneous production, heavy exploitation of natural resources. Competitive land with cassava crops, sugarcane and forest land has taken place. In the future, needs of cassava for bio-fuel production maintained at a high level. Demand for meat and meat products as well as feed demand are also expected to increase in Vietnam. Some recommendations Need to review and adjust the plan in case the current status of cassava area was beyond the planning in several provinces. Production planning for medium and long term vision should identify the competitive advantage of the province / region to develop main cassava areas and the infrastructure associated to the processing industry to ensure environmental mitigation.The enterprise has the commitment of the province when the building materials applied to ensure applying good varieties, sustainable farming systems, minimize environmental impact for the region in main cassava station. ; Enterprises should also commit to the farmers in the area of raw materials to ensure stable raw materials for the business but also ensure income for farmers. This commitment can be regarded as a conditions as approved by the provincial planning of material areas for cassava processing. Building and developing the manufacturing sector focus should be accompanied with infrastructure development, especially water pumping systems, water supplies, roads and pollution treatment equipment (such as channel systems and wastewater discharge filtration) with the supervision and support of professional bodies and governments at all levels. 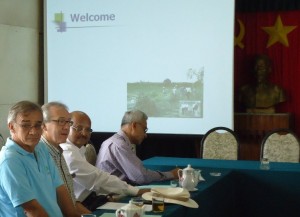 After twenty years of research, extension (1991-2010) Vietnam cassava plant was quickly converted from food crops to industrial crops. Cassava is now promising crop for both export and domestic use. Vietnam Cassava Program has agreed five solutions to develop cassava:

1. Determining the appropriate strategy of research and development in collaboration with the cassava processing factories to set the resource sector is stable, using cassava for bio-ethanol production.

5. Environmentally friendly issues and food security Bio-fuels development from cassava should focus on building and expanding the raw material, paying attention to environmentally friendly and food security. The development of the program is not the direction of improved cassava production to increase output but also to focus on distribution systems, processing, consumption, regulate interest groups, improving economic performance quality products, competitive advantage, building a healthy environment and prosperous rural life.

hoangkimvietnamHoangKim
Martin Fregene, Congratulations. We would like to learn and work together with you. ! http://lnkd.in/-JuAPw Cassava f…http://lnkd.in/4UX2ZG
20 Apr Favorite Reply Delete
»